The generalized form of system components, which is depicted in the Quick Start Guide (Python/Java) looks like as follows.

Note that Writer and Reader functionalities on client side can be Android version, Linux version or the mix of them. In this tutorial, we focus on cases in which Android application works as both Writer and Reader, or either of them.

Just like the tutorials for Python/Java version, we setup Broker functionality on a Docker container, which is a virtual running environment for applications. For this purpose, you will take following steps; 1) install the Docker Engine on a host machine, 2) download and run the Docker container prepared for this tutorial. 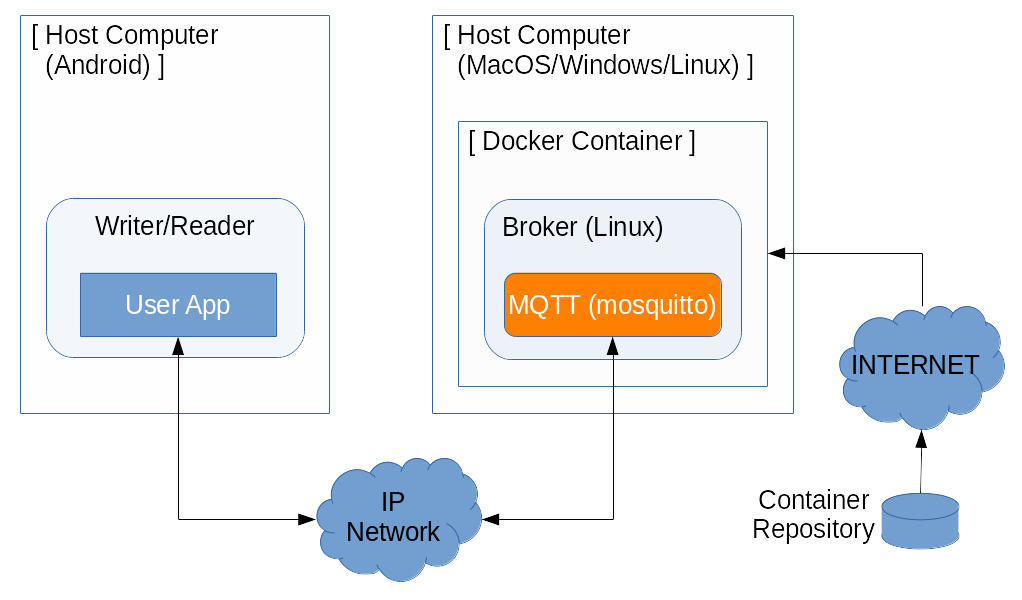 In short, there are several steps to build the operation environment for this tutorial. You need to prepare the back-end system, install the client application on your Android device, and set connection parameters for the two of them. Detailed work procedures will be shown on latter parts.

Following conditions must be fulfilled to run this tutorial.

3.3 Observatory PC (applicable only for the STEP2 shown below)

To show sample usages of SINETStream for Android, we provide two scenarios below.

Detailed procedures are shown in the links above. Both two of steps are independent, and thus you can try one of them only, or run each of them sequentially.

If you are going to run above two samples sequentially, try STEP2 first for smooth operations.

In STEP1, the Broker can be anything. But in STEP2, the dedicated container image must be used so that the back-end system to couple with the Broker for sequential processing. That is, if you run STEP2 first and leave the container image running, you can reuse the Broker as is in STEP1.

Of course, you can use the Broker, which is in the tutorial container for the Python/Java version, as the back-end system of STEP1. In this case, beware not to forget to replace container image before running STEP2.